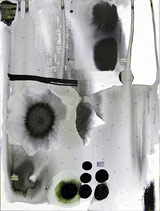 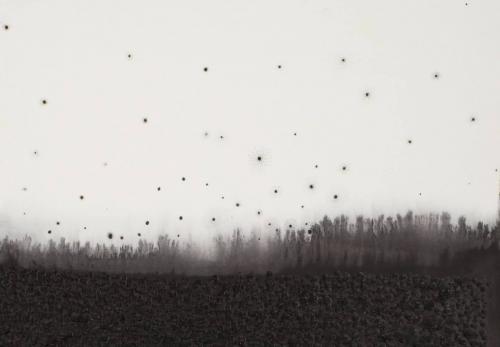 ‘Painting is an uninhabited space of not being - yet being. A contradictory and ironical motive: for the action of painting becomes an act of nothingness. Unbundled by the known. Active meditation and contemplation, not to defy or define - just being. Moving to a thoughtless moment of listening (to oneself), till one exhausts words.’ Clifford Charles was a guest at the Thami Mnyele Foundation in 1993. Since then he has maintained close ties with the Netherlands. In 2007 Clifford Charles was a guest at the studio to prepare new projects and intensify his network in Europe, The Netherlands. In the 90’s, Clifford Charles made a series of oil paintings depicting human figures as bloody, aggressive beings brandishing whips and sometimes wearing gas masks. The monochrome background, which is usually white or yellow, serves to draw more attention to the figures. The paintings were titled ‘Metamorfoses’. Presently his artistic practise is focused on expressions of contemplation. Working within the foundation of contemporary paintings and drawings, Charles challenges the notions of reception and the appreciation of art.