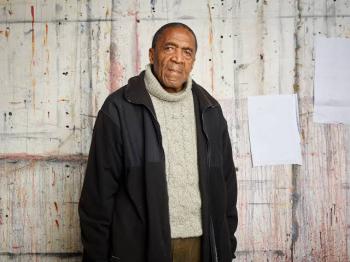 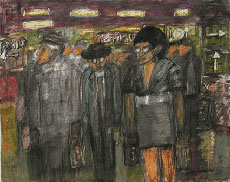 ‘No object stands on itself, it always builds upon other objects.’

Artist/curator David Koloane (1938) has been involved in the visuals arts in South Africa for the last twenty five years.
Koloane studied art at the Bill Ainslie Studios in Johannesburg. He established a reputation both locally and internationally as a pioneer black artist in apartheid South Africa and was a founder member of institutions promoting and supporting black talent in South Africa from the mid Seventies. He is the co-founder and director of the Fordsburg Artists Studios (the Bag Factory).
Koloane’s work is abstract expressionistic, but has recently gained a more figurative character. Koloane’s work and recurrent themes should perhaps be viewed in the social context of what shaped his sense of identity as a man and as an artist. The painter’s preoccupation with the dark side of urban life can be interpreted as a constant reminder that the past still hovers over South Africa. David Koloane wants to make new what has become old.