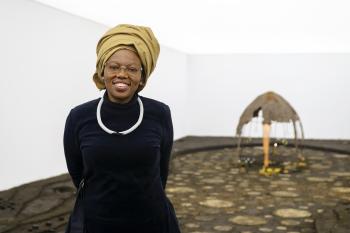 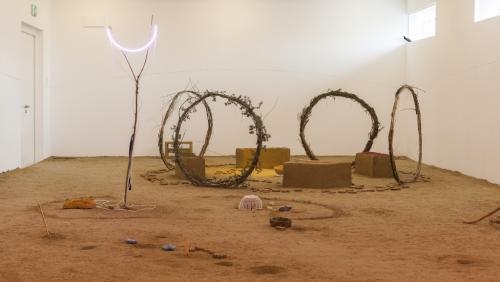 Dineo Seshee Bopape was born in Polokwane South Africa (1981) and studied at Durban institute of technology. After a two-year working period at The Ateliers in Amsterdam, she lives between Amsterdam, Polokwane and Durban. Her work aims to engage the poetics of language, the psycho-sexual, the power politics embedded in the fabric of the every-day. Personal/privatised dramas are teased out sometimes close to oblivion to arrive at a 'place' of not one specfic narrative, but a discordant orchestreal mess/harmony of small stories told in light, sound and colour. physical objects are taken from the everyday and are made to 'perform'- made to ooze with 'unnatural' sensuality, sadness, beauty, violence, happiness , to exist outside of their commonplace. Within the videos, she attempts to re-look, re-examine, in order to de/re-construct the image of 'me'-(and 'you'), - the self and the other.
Dineo Bopape seeks to ask questions about a 'self' which is assumed, performed, assigned, suggested, fixed, unfixed, unwoven.

Life Less Ordinary: Performance and Display in South African Art at the Fotogallery in Cardiff, Wales (2010), and Rebelle: Art and Feminism 1969-2009 at the Museum voor Moderne Kunst Arnhem, The Netherlands (2009)

NEWS: Dineo Bopape takes up a Fountainhead residency in Miami in March 2011. She is included on Mine: A selection of films by South African artists at Iwalewa-Haus, University of Bayreuth (10 February - 6 March), and Alterating Conditions: Performing performance art in SA at The Bag Factory and GoetheonMain, Johannesburg (11 January - 15 February).