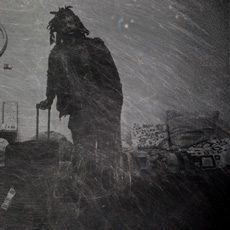 Em’kal Eyongakpa (b.1981, Cameroon) lives and works between Yaounde, Cameroon and Amsterdam, Netherlands. Drawing on dreams and observations, he approaches the experienced, the unknown as well as collective histories through a ritual use of repetition and transformation. He works with photography,video, sculpture, text, sound and performance. His interwoven installations not only obscure the boundaries between employed media but could also distort the notion of the real and the illusory. He has exhibited at Saavy contemporary and NBK, Berlin (2014), Sesc_Videobrasil, Sao Paulo (2013), Whitworth Art Gallery, Manchester (2012), 10th Dak’art biennale, Dakar (2012), IFC yaounde, (2012), Doual’art, Douala (2011) among others. From 2013-2014, he was a resident artist at the Rijksakademie Van Beeldende Kunsten, Amsterdam. He was in residency at Kadist Art Foundation, Paris where he had a solo in 2015.