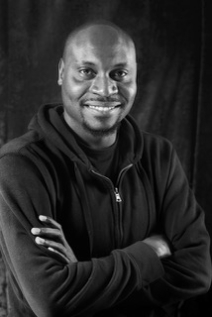 Georges Senga was born in 1983 in Lubumbashi Congo. He obtained a degree in language and business sciences at the University of Lubumbashi 2009. Already a year earlier, he began his work as a photographer. During the Biennial of Lubumbashi "Rencontres Picha" he took part in a workshop of the Brussels photographer Marie-Françoise Plissart. As a result of this experiment, Georges spent six months working on a project on Katanga's urban landscape entitled "My new ceilings". In 2009, he won the special prize for the second edition of the Africa Photo Contest of Tarifa (Spain). That same year, he exhibited at the French Cultural Center of Lubumbashi. In 2010, he worked on a series around forms of what the photographer sees through abandoned objects. The curator Simon Djami for the Biennale of Lubumbashi selected this series entitled "Imprints" in 2010. The following year this series was presented in Lubumbashi, Tarifa, Nairobi and Bamako. From 2011 to 2013 Georges participated in a "Master Class" program organized by the Goethe Institute of Johannesburg in different cities of Africa (Bamako, Lagos and Lubumbashi). During this period of the new series "A life after death" and "Kadogos" were realized.

"A life after death" on Patrice Lumumba was exhibited at the Contemporary Art Gallery Dialogues of the National Museum of Lubumbashi in 2013, the Kampala Biennale, at the ADDISPHOTOFEST in 2014, at the BRASS Cultural Center in Brussels, and at the Biennial of Bamako where he obtains the Leon African Award in 2015. This series deals with the passage of time and the timelessness of what Lumumba means.
From September 2015 to February 2017 in residence at the Solitude Academy in Stuttgart Germany, Senga realizes another new series "This house is not for sale and for sale" between Lubumbashi in DR Congo and Sao Paolo in Brazil. This series exploits the commune KATUBA in Lubumbashi a city in the south of the DR Congo. Katuba divided by neighborhoods (Katuba 1st, two and three) was one of the municipalities created on a loan from a company FUND ADVANCED in the colonial era in the 1945s. Most homes build today object of a conflict of inheritance and thus are sealed with a large writing face "THIS HOUSE IS NOT FOR SALE" to warn anyone who wants to invest his money for the purchase.
Georges Senga is part of the artistic dynamic of the city of Lubumbashi at the PICHA art center in DR Congo and Marketphoto worshop and Phototools of Johannesburg, South Africa.