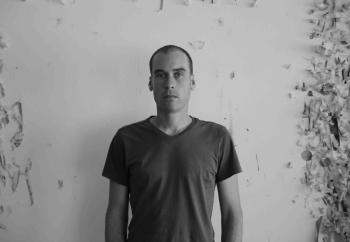 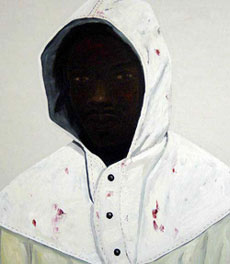 ‘Ultimately, I want to create some degree of tension between the artwork and its interpreter, a space that should be filled with questions rather than answers.’

John’s work is a play between different images and themes, often referring to the cultural, economical and emotional distinctions that exist in South African society. He works with a wide range of iconography that is seldom coherent in meaning or association. Murray views his work as a way of exploring themes such as ambiguity and contradiction, which are mainly inspired by his social environment, but are also investigated in the formal aspects of painting and drawing.
The portrait forms a big part of Murray’s work. His way of painting is a process of scraping and layering, often causing the image to get quite dark in tone. Murray has become quite interested in how this process can lead to ambiguity in terms of interpreting the identity of the portrait, but also how the use of colour in painting can somehow reflect the sensitivities surrounding colour in his society.
John Murray finished his BA (FA) at the University of Stellenbosch in 1996. He has since had four solo exhibitions and has participated in various group exhibitions. He also works as an illustrator and has contributed to Bitterkomix and I-Jusi magazine. He lives with his wife, Annebelle, in Sea-Point, Cape Town. John Murray (1973) was a guest of the Thami Mnyele Foundation during the Summer of 2003.

stevenson.info
Artsy.net
What If the World Gallery