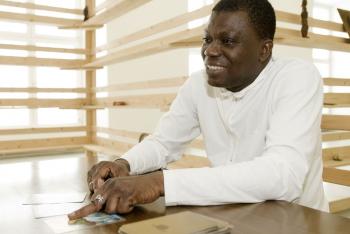 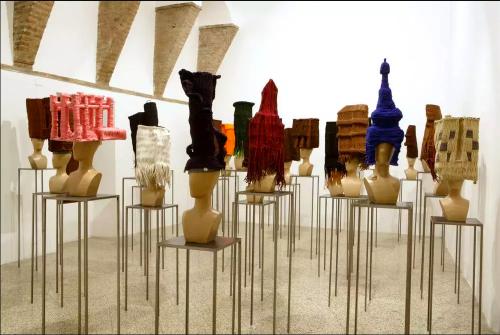 Meshac Gaba (1961) first conceived his Contemporary African Art Museum when he was studying at the Rijksacademie in Amsterdam. The Museum provides an alternative to the colonial context in which western museums display African art. Gaba aims to expose prejudiced ideas about African art and at the same time point out the lack of museums or galleries for modern art in Africa.
During the early 1990s, Meshac Gaba started reflecting on the devaluation of currency by incorporating bills in a series of two-dimensional works. The tension between economic power and colonization would inform all of Gaba’s work from 1997 onward, organized as successive sections of an imaginary Contemporary African Art Museum.
The Contemporary African Art Museum is about founding a structure where there isn’t one, without losing sight of the limitations of existing models that belong to a certain social and economic order based in the harsher realities of domination. On successive occasions, Gaba has shown various rooms from his museum.
Meshac Gaba worked in the Thami Mnyele Foundation Studio in 2002, in preparation for his contribution to the Documenta XI in Kassel. Meshac Gaba was selected for the Biennale Venice 2003.

His Tresses series has showed at inIVA in London (2006) and the Studio Museum in Harlem, New York (2005).. Other solo shows include Glue Me Peace at the Nobel Peace Center, Oslo (2006), and Tate Modern, London (2005). Group shows include Gaba's curatorial project Glück - Welches Glück, at the Deutsches Hygiene-Museum in Dresden, Germany (2008); Port City at Greenland Street Gallery, Liverpool (2008); Africa Remix (2004-2007) and, in 2006, the São Paolo, Gwangju, Sydney and Havana biennales.