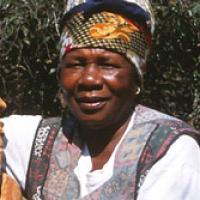 Noria Mbabasa was born in Tsigalo in 1938. Trained in the traditional methods of making pottery, Mbabasa’s first attempts at figuration came in 1974. Predominant themes in her work are dreams and African stories. In the early 70’s she made traditional figures such as the Domba initiation ceremonies. She observed the women with their babies and captured the daily life around her. After meeting the Venda sculptor Nelson Makhuba in 1983 she was inspired to begin wood carving, creating works on more contemporary themes. Mbabasa lives in Venda, a region in South Africa which is densely populated with trees. Like many artists in Venda, Mbabasa uses the trees to sculpt in wood.